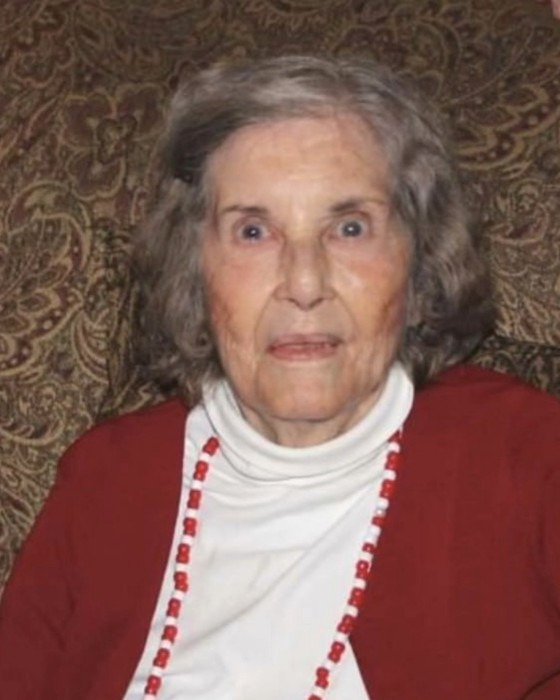 The family will follow current CDC guidelines regarding COVID-19.

Sara was one of five children born to the late Joseph Franklin McTier, Sr. and the late Lee Rooks McTier. She was born on October 5, 1928, on a family farm in the Gambles Mill School community of Jefferson County. After the death of her father at age 11, her family moved to Stapleton where she graduated from Stapleton High School as Salutatorian of her class. Her upbringing during the Great Depression instilled within her the value of living frugally, a lifestyle she practiced up until the end. From her mother, she learned the importance of pursuing a life with faith at its core. It was this strong faith that sustained her through her long life.

Following the end of World War II, Sara fell in love with and later married Walter Howard Stapleton on December 14, 1947. After the death of her mother-in-law, they moved to the family farm house where they raised three children. In addition to taking care of her family, she handled the books for the farming operations and for their fuel business. Following the death of her husband, Sara redirected her time to serving others through mission activities with the United Methodist Women, and the local chapter of the American Cancer Society. For fun, she took art classes after which she enjoyed creating pastel paintings. Sara also worked part time with Maxwell’s Department Store which provided her with the opportunity to meet new people and to visit with old friends. Sara was a long time, devoted member of the former Stapleton United Methodist Church where she served in many capacities over 60 years. She was a member of the former Stapleton Civic Club. Before her health failed, she enjoyed gardening, reading and traveling.

The family wishes to express its sincere appreciation to the staff of Silver Linings and to Regency Hospice for their compassionate care given to Sara during her final three years.

Sara took great delight in her many visits, cards, prayers, goodies and acts of kindness shown to her during her illness. Friends are encouraged to honor her memory by visiting a friend, neighbor or loved one who is confined to an assisted living facility.

To order memorial trees or send flowers to the family in memory of Sara Stapleton, please visit our flower store.