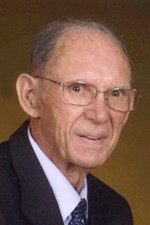 The youngest of five children born to the late Addie Cato and Robert Rabun, R G was a lifelong resident of Jefferson County. He proudly served our country in the Army and was very active in the community, serving Wrens as a volunteer fireman for 25 yrs and as the Fire Chief for 7 yrs; being a charter member and serving for 29 yrs on the Board of Directors of First State Bank; serving on the Wrens City Council for 12 yrs; and being a member of Woodmen of the World Lodge 1851, American Legion Post 229 and Kiwanis Club. After 44 yrs of service, R G retired as Production Mgr from Atwell Pecan Co. He was an active member of Wrens United Methodist Church, where he was a member of the Griswold Sunday School class and church choir, taught Intermediate SS class, and served as Chairman of the Finance Committee. R G was a quiet, unassuming man who enjoyed eating breakfast at Peggy’s with the guys, woodworking, building and fixing things, and cutting grass. He never met a stranger and was quick to help those in need. R G cherished his family and treasured his friends.

Oh, beautiful Star of Bethlehem,
Shining afar through shadows dim,
Giving a light for those who long have gone,
And guiding the wise men on their way
Unto the place where Jesus lay.

Oh, beautiful Star, the hope of light,
Guiding the pilgrim through the night,
Over the mountain til the break of dawn,
And into the light of perfect day
It will give out a lovely ray.

Oh, beautiful Star, the hop of rest,
For the redeemed, the good and blest,
Yonder in glory when the crown is won;
For Jesus is now that Star divine,
Brighter and brighter He will shine.

To order memorial trees or send flowers to the family in memory of R G Rabun, please visit our flower store.