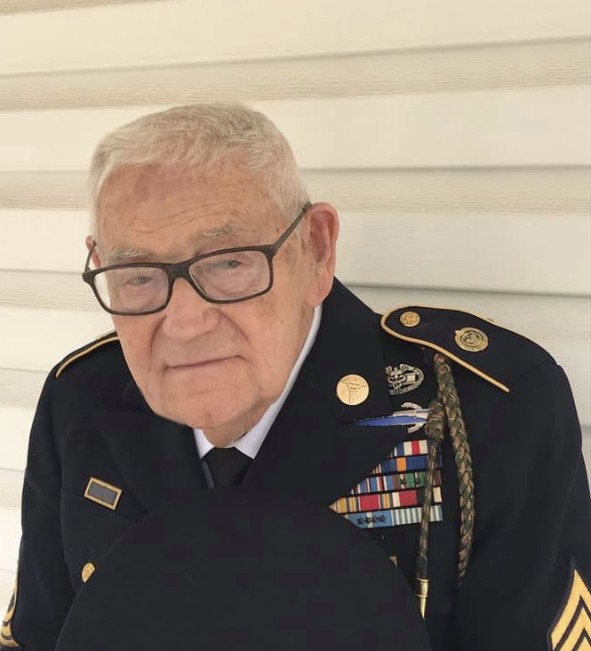 Randall Reeves Parish lived every day of his long, heavily-storied life secure that faith in and service to God, country and family were both a man’s duty and his clearest road to happiness. He passed from his earthly home early Thursday, June 23, 2022, surrounded by his children and family, embracing his heavenly father, his beloved wife Betty, and many more who preceded him.

Reeves was born Dec. 29, 1924 in the Wrens home of his parents, John Huff Parish and Pearl McGahee Reeves Parish. He was the third of five children.

From the time he could lift a bucket to pour in the pea-planter, Reeves worked on the family farm with his father and grandfather. There he developed a very strong work ethic that became a family trait. Reeves often quoted his father saying, “Laziness is next to ungodliness.” At 97-years-old Reeves was still proud that his father told him he was the best man he ever saw work in the field.

Reeves was drafted into the United States Army at the age of 17 and entered shortly after graduating from Wrens High School in 1943. Reeves said he jumped for joy when his papers were delivered. A soldier was all he had ever wanted to be.

After basic training he joined the infantry and was sent to England to await the invasion. He witnessed the D-Day convoy of ships traversing the English Channel on their way to Normandy, France.

Reeves landed on Omaha Beach on July 7, 1944 and entered combat less than 24 hours later. During his first day in battle he earned his first Purple Heart when hit by shrapnel and lost his best friend. Reeves was treated and returned to his unit within hours.

Over the next four months he fought across France, moving from hedgerow to hedgerow.  He earned a second Purple Heart, a Silver Star and other commendations before being shot by a sniper during the battle for Metz, on the German border.  He suffered from that injury for the rest of his life. Reeves kept a journal of those months, showing how an 18-year-old boy became a man. He retold those stories many times with tales his family cherishes.

He recovered at Oliver General Army Hospital in Augusta, Ga. where he volunteered in the cast room, eventually entering the Army Medical Corps. While at Oliver General he proposed to his childhood neighbor and friend Betty Hayes. Reeves and Betty married in Aiken on Aug. 9, 1946.

Reeves worked at Oliver General until he transferred to an Army hospital in Yokohama, Japan. Betty joined him there, and their first child, Randall Reeves Parish Jr, was born in May 1950. Less than a month later, North Korea invaded South Korea and he joined the 8076 MASH Army hospital, the first MASH ever deployed. His MASH Unit followed very closely behind the front lines, providing immediate surgical care to wounded soldiers.  Reeves was primarily assigned to assist with orthopedic surgeries in 12 hour shifts, sometimes standing in blood that covered the soles of his boots.

Reeves returned to the states in April of 1951 and was stationed at Fort Benning, Ga. where his second child, Joy Parish Belding was born. He was then assigned to Walter Reed Army Hospital in Washington, DC. While there he graduated first in his class from the clinical tech program and received his LPN degree. He later transferred to Fort Sam Houston, Texas where his third child, Molly Parish Howard was born. He was working in the hospital in Fort Gordon, Ga in 1956 when his fourth child, Jerry Parish Howard was born.

In 1960, Reeves returned to Korea as an advisor to the Korean military and served a year there before returning to Fort Sam Houston, where he trained US Army medics until retiring from military service in 1963 as a Master Sergeant. He then returned home to Wrens where he would live surrounded by a loving family  for the rest of his life.

After retiring from the Army Reeves farmed with his father and brother from sunup until mid-day and then worked as an LPN at the Lynwood Veterans Hospital in Augusta on the 3 p.m. to 11 p.m. shift. His youngest child, John Huff Parish, was born at Ft Gordon in 1966.

Reeves retired from Lynwood in the early 1970s and went to work for the City of Wrens as an EMT. With the help of his wife Betty, Reeves helped establish the first ambulance service on the north end of Jefferson County.

In 1974, Reeves became the first paid fire chief in Wrens and served in that capacity until he retired in 1986 to stay home and care for his grandchildren.

For the rest of his life he continued his service to God, country, family, and community. Over the years he and his wife opened their home and mentored teenagers who needed assistance.

Both at home and overseas, Reeves was always known to others as a man of God. In the trenches of both wars, his fellow soldiers  often called on him for prayers, hymns and spiritual guidance during injury and other personal crises. Later he taught Sunday school, led Royal Ambassadors For Christ, and served on the board of deacons for many years.

He asked his children to memorize a creed he pieced together himself, a creed by which he lived: “We rally around the one who needs you the most. We give. We love. We protect. We never take.” He taught his children to think for themselves, to hold up whatever ideas they might have to the light, to examine them and try to break them. He wanted them to test the truths they discovered and the ones that held up, to live by them. He was most proud of the fact that all five of his children went on to live lives of service to others.

Reeves was a Mason and member of Gibson Lodge 257 for over 60 years. He was also a member of the American Legion Wrens Post 229.

Honorary pallbearers are the Wrens and Louisville Fire departments.

A visitation with Reeves Parish’s family is planned for Wednesday, June 29, at 10 a.m. at James Funeral Home in Wrens. Services will be at noon followed by interment at the Wrens Memorial Cemetery.

The family respectfully requests that, in lieu of flowers, memorial contributions be made to REACH Scholarship in the name of Reeves and Betty Parish at https://donate.reachgafoundation.org/ OR to Wrens Presbyterian Church, c/o of Beth Usry, 107 Quaker Road, Wrens GA 30833.

To order memorial trees or send flowers to the family in memory of Randall Parish, please visit our flower store.