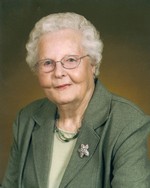 Wrens, GA  – Marjorie Smith Rowland, 90, loving wife of the late Samuel “Leroy” Rowland, entered into rest Thursday night, January 10, 2013 at University Hospital McDuffie. Funeral services will be held at 3:00PM Saturday, January 12, 2013 in the James Funeral Home Chapel with Dr. Stan Littleton officiating.  Interment will follow in Wrens Memorial Cemetery.
One of four children born to the late Mamie Crutchfield Smith and the late Albert Smith, Marjorie was a lifelong resident of Jefferson County, a member of Wrens United Methodist Church and the Griswold Sunday School class. She was a seamstress at Stapleton Garment Co, worked at Atwell Pecan, and retired from Tracey Luckey Pecan Co.  Marjorie thoroughly enjoyed working in her garden, fishing and watching the Atlanta Braves. She was always on-the-go and spent all of her leisure time with her family, with whom she was very close.  Marjorie was an independent, loving woman who will be greatly missed.
Marjorie was also preceded in death by her brother, Grover “Buddy” Smith.  Survivors include her three children, Samuel A. Rowland (Linda) of Harlem, Linda R. Bryan (John) of Lincolnton and Billy L. Rowland (Judy) of Matthews; her siblings, Frances Channell (Joe) and Ben Smith (Betty); 6 grandchildren, Terri A. Dawson (Terry) of Lawrenceville, Jill Marriott (Leon) of Grovetown, Allen S. Rowland and Samantha L. Rowland, both of Harlem, Andrew S. Bryan (Monica) and Eric P. Bryan; 2 great grandchildren, Anna M. Marriott and Wesley B. Dawson; and several nieces and nephews. Serving as pallbearers will be Steve Anderson, Kenneth Channell, Bennett Clark, Raley Clements, Wayne Favors and Gary Rhodes.
Memorial contributions may be made to Wrens UMC, 202 Russell St, Wrens GA 30833.
***********************
Legacy of Love

A wife, a mother, a grandma too,
This is the legacy we have from you.

You taught us love and how to fight,
You gave us strength, you gave us might.

A stronger person would be hard to find,
And in your heart, you were always kind.

For all of us you gave your best,
Now the time has come for you to rest.

So go in peace, you’ve earned your sleep,
Your love in our hearts, we’ll eternally keep.

To order memorial trees or send flowers to the family in memory of Marjorie Rowland, please visit our flower store.