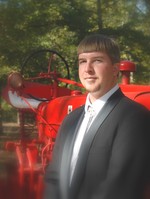 Gibson, GA  –  After a long illness, Jonathan Brent Williford, 28, loving husband to Dorothy Virginia Williford, entered into rest Wednesday evening, September 5, 2012 at University Hospital.  Funeral services will be held at 2:00PM on Saturday, September 8, 2012 in the James Funeral Home Chapel with the Reverends Glen Kohlhagen and Bobby Williford officiating.  Interment will follow in the Williford Family Cemetery in Gibson GA.
Born to the late Wilbur K. Williford and to Madonna Lamb Williford, Brent was a lifelong resident of Glascock County—God’s Country. He was a workaholic and an outdoorsman—he loved hunting and fishing. His tractor of choice was the Farmall and he drove Ford trucks. Brent was a loving husband, devoted son and brother, and dependable friend—he was beyond ordinary. His humor and fun-loving attitude was infectious and will be greatly missed.
He is also preceded in death by his grandparents, Charlie and Marie Lamb, and Edison and Sadie Williford. Other survivors include his two brothers, Logan Williford (Rachelle) and Dawson Mullins; brother-in-law, Kelvin Kitchens (Amanda); sister-in-law, Elizabeth Kitchens; mother-in-law, Miriam Kitchens; nephews, Wyatt and Will; his little canine buddy, Brownie; and many friends. Pallbearers will be Jim Holton, Chris Rushing, Cecil Shelton, George Welch, Jerry Wood and Roy Yarborough.
The family will receive friends at James Funeral Home from 6:00-8:00PM Friday evening, September 7, 2012.
******************************
Young Life Cut Short

Do not judge a song by its  duration
Nor by the number of its notes—
Judge it by the richness of its contents.
Sometimes those unfinished are among the most poignant…

Do not judge a song by its duration
Nor by the number of its notes—
Judge it by the way it touches and lifts the soul.
Sometimes those unfinished are among the most beautiful…

And when something has enriched your life
And when its melody lingers on in your heart,
Is it unfinished?  Or is it forever endless?

To order memorial trees or send flowers to the family in memory of Jonathan Williford, please visit our flower store.