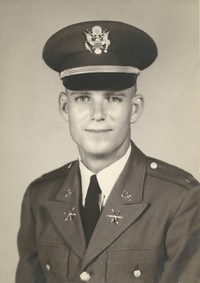 Hephzibah, GA  – Major (Retired) James “Jimmie” Elbert Enfinger, Sr., 73, left from University Heart and Vascular Institute for his heavenly job to work for his Lord on  Sunday, May 26, 2013. Funeral services with full military honors will be held at 11:00AM Friday, May 31, 2013 at the Bath Presbyterian Church with Pastor Dick Geiselman officiating. Interment will follow in the church cemetery.

Jimmie was one of 14 born to the late Hazel and Francis Enfinger. Being part of a large family, he learned at a young age the value of hard work. In 1958, he joined the US Army where he rapidly gained promotions, then applied and graduated from Officers Candidate School. He served in the Vietnam War, received various awards for duty and bravery, and retired with over 20 yrs of service as a Major at Fort Gordon. Upon retiring from the Army, he began a very successful business-American Custom Fence Company. Through his honesty and hard work, his company gained the respect of not only his customers, but his competitors as well. When not working, he enjoyed time fishing with his “Briar Creek Buddies” or visiting with his dear friend, Marian. Whether they were at the “cabin” cooking, reading books, or on the road visiting state parks, this was a time he looked forward to and very much enjoyed. Jimmie dearly loved his  children and grandchildren who gave him much joy. He will be greatly missed by all who knew him.

God grant that I may live to
fish for another shining day,
But when my final cast is made
I than most humbly pray,
When nestled in you land net
as I lay peacefully asleep,
You'll smile at me and judge
that I am good enough to keep.
To order memorial trees or send flowers to the family in memory of James Enfinger, Sr., please visit our flower store.