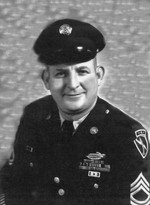 Wrens, GA  – Ernest Walter “Smitty” Smith, 87, loving husband to the late Helen Bush Smith, entered into rest Friday, June 1, 2012, at the Downtown Division of the CNVAMC.  Graveside funeral services with full military honors will be held at the Wrens Memorial Cemetery on Sunday, June 3, 2012 at 3:00PM with the Rev. Willie Scoggins officiating.
Smitty was born to the late Inez Mulligan Smith and the late Chester Franklin Smith Sr in Liberty SC. He proudly served his country in the Air Force during WWII, and then in the Army during the Korean War and Vietnam, and retiring after 28 yrs. He was honored by being listed on the WWII Memorial in Washington DC along with his WWII activities and medals.  Smitty settled in Wrens in 1965 after meeting and marrying his sweetheart. He loved to fish and do yard work. Since making the Uptown Div of CNVAMC his home, he became the care taker of the birds. Smitty was a very unique personality who was devoted to his family.
Smitty was also preceded in death by his sister, Beatrice S. Player. Survivors include his children, Rodney W. Smith (Pam), Peggy S. Cannon (Randy) of Milledgeville GA, and Cynthia E. Jones (Howard) of Walterboro SC; three grandchildren, Jeff Smith (Shannon), Chase Smith and Will Cannon; two great grandchildren, Ryan Jacob Smith and Anna Grace Smith; five brothers, Carl E. Smith (Betty) of Simena OK, J.B. Smith (Val) of Clayton GA, Billy Wayne Smith (Donna) of Elberton GA, Frank Smith (Lila) of Easley SC, and Donald E. Smith (Joann) of Liberty SC; a brother-in-law, John A. Bush Jr.; and several nieces and nephews.
The family will receive friends one hour prior to graveside services—from 2:00-3:00PM—Sunday, June 3, 2012 at James Funeral Home.
Honorary memorials may be made to The Relay For Life, c/o Dianne Rhodes, 2771 Hwy 102, Wrens GA 30833.
The family wishes to express their heartfelt thanks to the staff at both the Uptown and Downtown divisions of the CNVAMC for their excellent care and devotion.
**************************
When I’m Gone

When I come to the end of my journey
And I travel my last weary mile,
Just forget, if you can, that I ever frowned
And only remember the smile.
Forget unkind words I have spoken;
Remember some good I have done.
Forget that I ever had heartache
And remember I’ve had loads of fun.
Forget that I’ve stumbled and blundered
And sometimes fell by the way.
Remember I have fought some hard battles
And won, ere the close of the day,
Then forget to grieve for my going,
I would not have you sad for a day,
But in summer just gather some flowers
And remember the place where I lay,
And come in the shade of evening
When the sun paints the sky in the west.
Stand for a few moments beside me
And remember only my best.
********************

To order memorial trees or send flowers to the family in memory of Ernest Walter Smith, please visit our flower store.