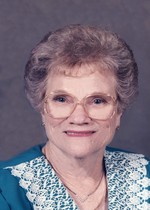 Wrens, GA.  – Elizabeth Henderson Wren, 92, loving wife of the late Leroy Watson Wren, entered into rest Saturday evening, December 1, 2012 at Trinity Hospital. Funeral  services will be held in the James Funeral Home Chapel on Monday, December 3, 2012 at 3:00PM with the Revs Dewey Henderson and J. Scott McKinney officiating.  Interment will follow in Wrens Memorial Cemetery.
One of three children born to the late Onie Holland Henderson and the late Julian Embrey Henderson, Elizabeth lived in Hapeville until the age of 14 when her family moved to Wrens to open the Chevrolet dealership. She was a pharmacy tech employed by Fleming Drug Co and one of the oldest members of Wrens Baptist Church where she was the secretary of the Jr Dept for many years. Elizabeth enjoyed all kinds of crafts—ceramics, crocheting, knitting, and sewing, taking on such projects as making her daughter’s wedding gown and square dance dresses.  She was a dedicated friend and loving, devoted mother.
She was also preceded in death by her siblings, Craig Henderson and Marie Simpson. Survivors include her two children, Jane W. Smith (Ray) and Julian L. Wren (Marianne); four granddaughters, Anita Harrelson (Greg), Karla Lopez, Kelli Crackel (Phillip) and Krissi Wren; eight great grandchildren, Kaila Dixon, Seth Harrelson, Caleb Harrelson, Sofia Lopez, Colton Lopez, Noah Pitts, Jacob Pitts and Klaudia Crackel; one great great grandson, Christian; and several nieces and nephews. Pallbearers will be Seth Harrelson, Caleb Harrelson, Colton Lopez, Noah Pitts, Phillip Crackel, Michael Richards, Cliff Hill and David Brannen with Christian serving as an honorary pallbearer.
Memorial contributions may be made Alzheimer’s Foundation of America, 322 8th Ave, 7th FL, New York NY  10001 or by visiting alzfdn.org.
***************************
Come With Me

The Lord saw you getting tired
And a cure was not to be
So He put his arms around  you
And whispered “Come with me.”

With tearful eyes, we watched you suffer
And saw you fade away.
Although we loved your dearly,
We could not make you stay.

A golden heart stopped beating,
A beautiful smile at rest.
God broke our hearts to prove
He only takes the best.

It’s lonesome here without you.
We miss you so each day.
Our lives aren’t the same
Since you went away.

When days are sad and lonely,
And everything goes wrong
We seem to hear you whisper,
“Cheer up and carry on.”

Each time we see your picture,
You seem to smile and say,
“Don’t cry. I’m in God’s keeping.
We’ll meet again someday.”

To order memorial trees or send flowers to the family in memory of Elizabeth Wren, please visit our flower store.